How does calling yourself a Voluntaryist, Anarchist, or Libertarian make you feel? Do those ideas with which you identify empower you?

Right now, the realization that one identifies with Anarchist, Minarchist, Libertarian, Objectivist or Voluntaryist views (which I will shorten and call "AmLov" views for the rest of this article) is a depressing, horrifying realization. To be a Regular American is way cooler than to be an AmLov. AmLovs are the freaks on the fringes of soceity. They wear a lot of black but they are rarely sexy. They complain a lot about government conspiracies to keep them sick, but they are rarely healthy. They complain about people stealing from them, but they don't look like people who have anything worth stealing. They mostly seem angry, unhappy and lonely. Perhaps that is because that is how they are portrayed on television, but perhaps there is a grain of truth in every stereotype. Either way, who wants to feel angry, unhappy and lonely?

This is what I see as largely the difference between the new and old generation of AmLovs. Old-timers are all about neo-cortex conversion politics. The new AmLovs know that the best way to convert anyone to anything is simply by modeling it, modeling how awesome life is, how confident, happy, healthy, wealthy and wise we are now that we identify as Freedom Lovers. But... are we? Because I don't want to seem anything, I want to be all of those things.

My favorite video on this subject is: http://www.youtube.com/watch?v=OinbqNb7Uno

I was thinking about this because of a similar topic: Cool, Sexy, Fun Health

There are some ideas that sell, catch on and catch fire in the public imagination and have the potential of changing the world. Most of the ideas that do change the world are not good ones. There is so much amazing information out there that has a tiny audience.

I was so frustrated with all the bad health advice being given that in my twenties I started a company called Nutritionally Perfect Meals--and then I found the Weston A. Price Association. Their views were exactly what I had discovered after years and years of research. How was it that they had existed that whole time while I was doing all that reading and researching but I had never heard of them? How is it that today, the Paleo Diet, so similar to WAPF yet so inferior, is the one that has captured the public?

My theory is marketing. Check out these two magazine covers: 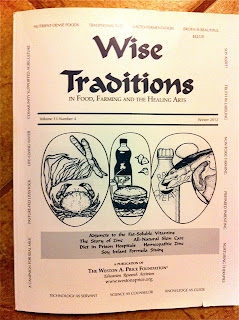 This is the quarterly journal of the Weston A. Price Association. Incredible information. Very dense. But look at this cover compared to the one below for the Paleo Magazine. Who would want to identify with this MESS when they could identify with the COOL, HIP Paleo cover below.

I read both magazines cover to cover and the inside of the magazines are the same as the outside. Paleo sells sells sells. Their articles are not long and are fairly shallow but they are upbeat and always make being Paleo cool. 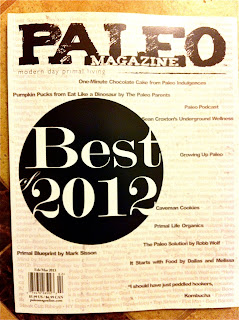 The Wise Traditions (WAPF) articles are long and packed with scientific research, number, graphs, experiments. The information is awesome but it is is just your friendly, local health-nut, librarian with tons of information that you can take or leave. They are above selling themselves.